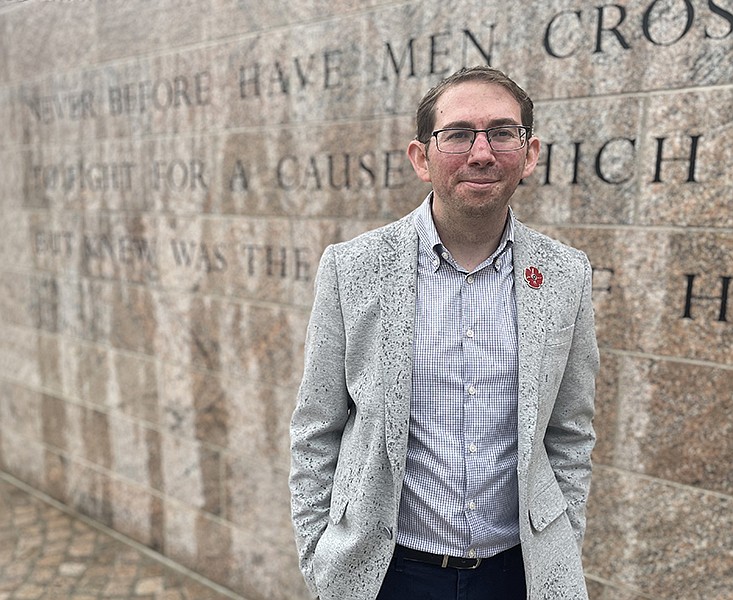 Six years after he entered a competition to design a national World War I memorial, Arkansas native Joseph Weishaar is nearing the finish line. The memorial opens to the public Friday. (Arkansas Democrat-Gazette/Frank Lockwood)

WASHINGTON -- Nearly six years after Fayetteville native Joseph Weishaar submitted his initial entry, the national World War I memorial he designed is about to open.

Friday morning, dignitaries will gather for a small flag-raising ceremony.

Washington covid-19 rules, updated in March, allowed "outdoor gatherings of up to 50 people," so attendance will be limited.

The event will include a military flyover as well as pre-recorded comments by President Joe Biden.

Afterward, the fencing surrounding the 1.76-acre park on Pennsylvania Avenue will be removed and the public will be allowed in.

Poppy seeds, imported from the original war zone, have been planted. By June, they should be blossoming.

"It's pretty amazing" to nearly be done, Weishaar said during a drizzly tour of the site Wednesday afternoon.

The landscaping is finished, the stonework is complete and the water features are already running.

The $50 million project is nearly paid for; $48.61 million has already been raised.

Roughly 4.7 million Americans served in uniform during World War I.

The United States entered the conflict in April 1917, enabling England, France and their allies to defeat the nations aligned with Germany and Austria-Hungary. Millions of people died in the conflict, including 116,516 Americans.

Until now, there has been no national monument in Washington honoring their sacrifice.

There won't be any veterans of the conflict at Friday's ceremony. The last U.S. World War I military veteran, Frank Buckles, died on Feb. 27, 2011; he was 110 years old.

The new memorial pays homage to the heroes of World War I. But it also sends a message to every man and woman who has ever donned a U.S. military uniform, Weishaar said.

"They will never be forgotten," he said. "Honor and sacrifice will always mean something to the people of this nation."

Congress passed legislation in 2014 authorizing the memorial at Pershing Park, a site that already features a statue honoring the man who commanded the U.S. troops in World War I -- General of the Armies John Joseph "Black Jack" Pershing.

The United States World War I Centennial Commission was tasked with picking the design and raising the money.

The selection of Weishaar generated plenty of headlines.

Given the challenges that arose between 2015 and today, there were times when the young Arkansan doubted the project would ever be completed, he said.

"To actually be standing in the park the week it opens is incredible," he said.

Read the entire article on the Arkansas Democrat-Gazette web site.