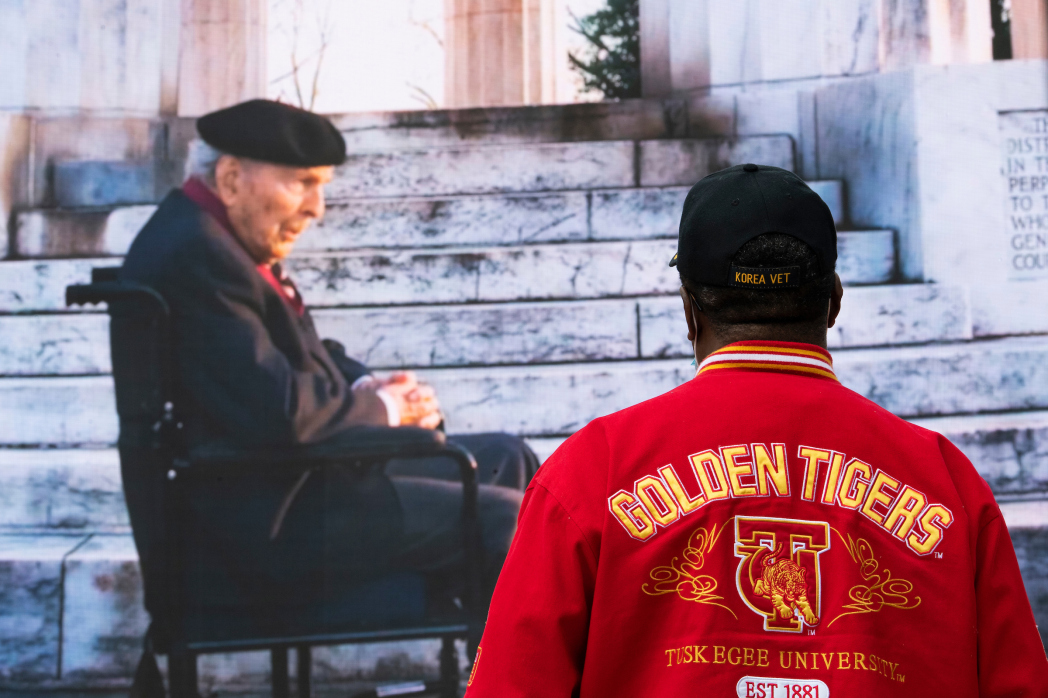 Army veteran Andrew Forte watches on a monitor the nearby ceremony in Pershing Park on Friday to open the National World War I Memorial. Frank Buckles, the last American WWI veteran to die, appears on the monitor. (Tom Williams/CQ Roll Call)

More than a century later, WWI gets its memorial in Washington

Washington does not want for monuments, but a new one to an old war opened with a flag-raising ceremony Friday.

The National World War I Memorial in Pershing Park is the first monument in the nation’s capital to all the 4.7 million Americans who served in the Great War and the 116,512 who would never come home.

As belated as the ceremony may have been, no pomp was spared during the hourlong event. There were recorded comments from President Joe Biden, Interior Secretary Deb Haaland and Senate Minority Leader Mitch McConnell, plus a military band, WWI doughboy and sailor re-enactors, and, scaring a sizable subset of the city, a military flyover by two F-22s that were considerably louder than the biplanes that fighter aces flew over the fields of Flanders more than a century ago.

No one who fought in the war is left — the last living American doughboy died in 2011 at the age of 110. Most of their children are also gone. Edwin Fountain’s grandfathers served in the Great War, but that’s not why he ended up leading the memorial’s construction effort.

Fountain started small, working on a monument to D.C. locals who fought. “The D.C. war memorial was in a sad, sad state of repair, and somebody needed to help get it restored, and so I took that on,” said the former vice chair of the World War I Centennial Commission.

A lawyer by trade, Fountain developed an interest in historic preservation over his years living in a city that can often feel like one big sprawling museum. The successful effort to restore that memorial led to the campaign to create another, more ecumenical one, starting in 2008.

To Fountain and others who would go on to form the Centennial Commission, it just seemed wrong that America’s other major wars — World War II, the Korean War and the Vietnam War — had national memorials in the capital, but not the First World War.