After years of wrangling, WWI memorial opens in D.C.

By Jennifer Steinhauer
via the StarTribune newspaper (MN) web site

WASHINGTON – Memorials to the war dead of the 20th century are among the central attractions in the nation's capital. So it has always been notable that one of the most consequential U.S. conflicts, World War I, lacked national recognition. 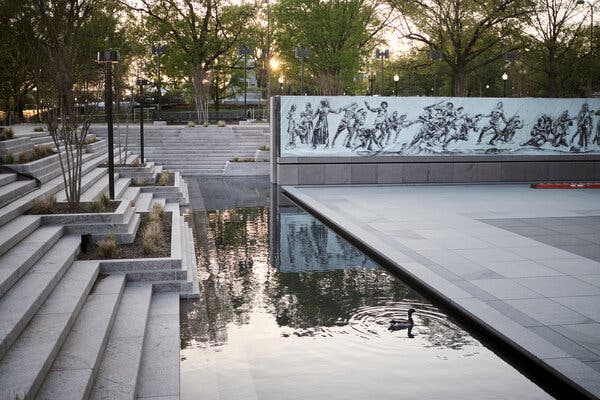 The design, restoration of Pershing Park and construction of the new memorial in Washington will cost $42 million.Credit...T.J. Kirkpatrick for The New York TimesNow, as the United States withdraws from its longest war, a memorial that recognizes one of its most complicated ones officially opened in Washington on Friday after years of tangling among preservationists, urban planners, federal officials and the commission that realized its creation.

The first flag was raised at the memorial in Pershing Park, near the White House — rather than along the National Mall, where many supporters had envisioned — on a spot once used for ice skating, cocoa sipping and midday sandwich nibbling by hurried office workers who sat under the crepe myrtles. Fights over the memorial's location, accuracy and scale have been part of its journey.

"Our objective was to build a memorial that would stand shoulder to shoulder with other monuments and elevate World War I in the American consciousness," said Edwin Fountain, vice chairman of the World War I Centennial Commission, "at the same time recognizing that unlike those memorials, this has to be a memorial and an urban park."

The only original nod to the war in the park, a statute of Gen. John J. Pershing, who commanded the American Expeditionary Forces in Europe, will remain at the edge of the space. But the memorial's central focus is a large wall that will hold its final feature: a 58-foot bronze sculpture that is either a bold testament to the significance of the mission or a detraction from its natural setting, depending on the point of view.

The design, restoration of the original park and construction of the new memorial will cost $42 million. The commission has $1.4 million left to raise.

The sculpture, "A Soldier's Journey," tells the story of one American's path from reluctant service member to returned war hero through a series of scenes featuring 38 figures. They are meant to convey the story of the country's transformation from isolationist to a leader on the world stage, with a final visual reference to the next big war.