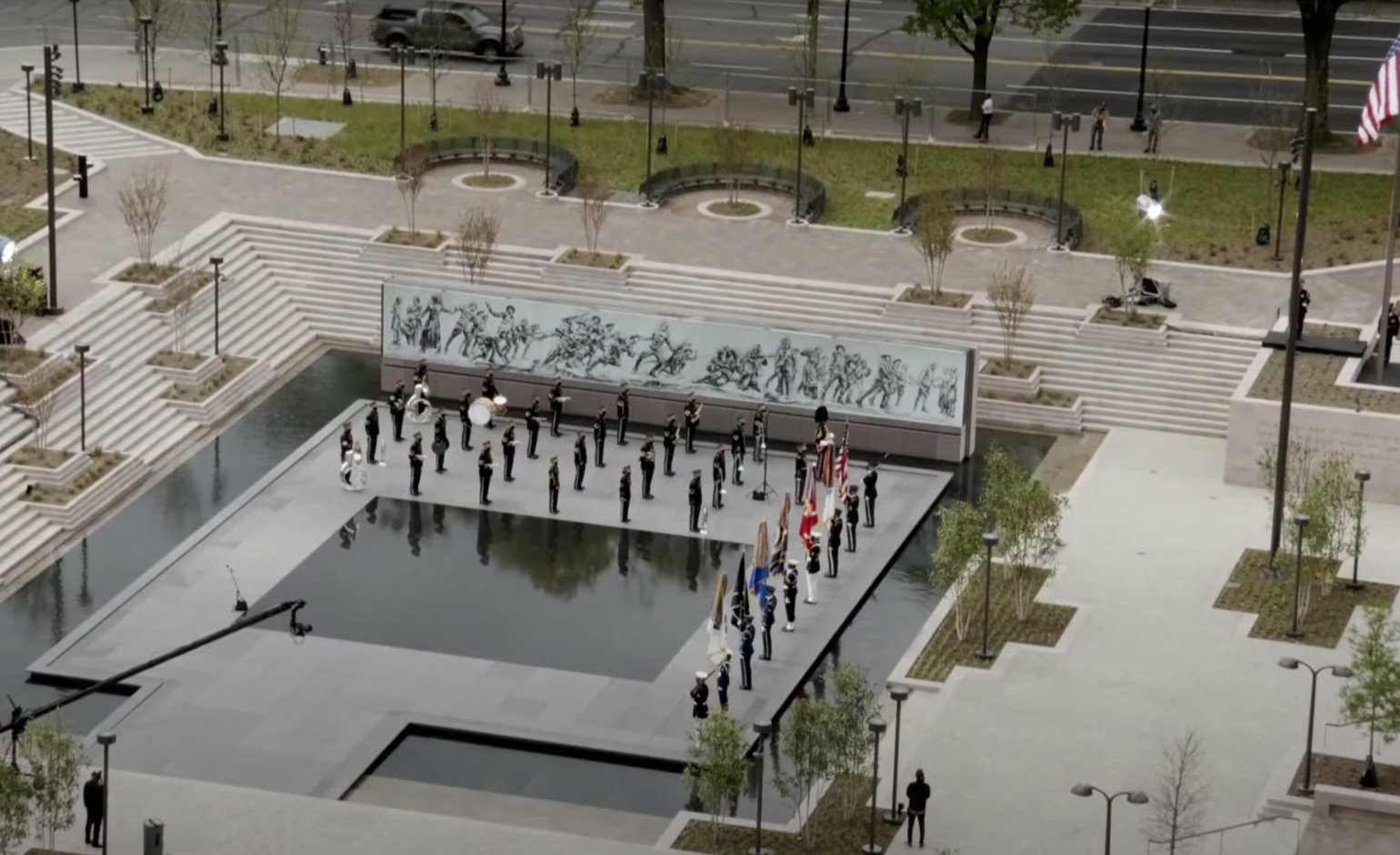 The U.S. Army Band "Pershing's Own" plays as the Star Spangled Banner is raised for the first time over the new National World War I Memorial in Washington, DC.

A new memorial honoring the 4.7 million people who served in World War I was introduced on Friday in Washington, D.C.

The World War I Centennial Commission, with help from service members representing each branch of the military, presented the National World War I Memorial in a first colors ceremony in Pershing Park. Most of the ceremony, which was livestreamed, was prerecorded.

“Let's remember all that was sacrificed, all that was sanctified by our proud, brave Americans who served in World War I,” President Joe Biden said during prerecorded remarks aired during the ceremony. “The commitment and valor of the American women and men who stepped up to serve, whether here at home or on the front lines in Europe, was the same spirit that has always defined American service members.”

While the D.C. War Memorial has honored residents of the district who gave their lives in World War I since 1931, the new memorial is the first one established in Washington to honor all of those who served in World War I.

Edwin Fountain, the former vice chairman of the WWI Centennial Commission who was described by one speaker as the “visionary” behind the memorial, described how the idea for the project emerged he was visiting the D.C. War Memorial.

“I thought, ‘Why do we have national memorials to three of the four great wars of the 20th century but not to the Great War?’” Fountain said during the virtual ceremony.

The flag raised during the ceremony was first flown over Washington on April 6, 2017, and subsequently over WWI battlefield cemeteries throughout Europe, the World War I Centennial Commission said in a news release. It will be the permanent flag to fly above the memorial.

Along with the memorial's main fixture, a monument portraying troops in various combat and noncombat scenes, the memorial includes a selection of verse from 20th-century poet and former Librarian of Congress Archibald MacLeish, himself a World War I veteran.

“They say, Whether our lives and our deaths were for peace and a new hope or for nothing we cannot say: It is you who must say this,” the poem reads. “They say, We leave you our deaths: Give them their meaning: We were young, they say. We have died. Remember us."

Read the entire article on the Washington Examiner web site.