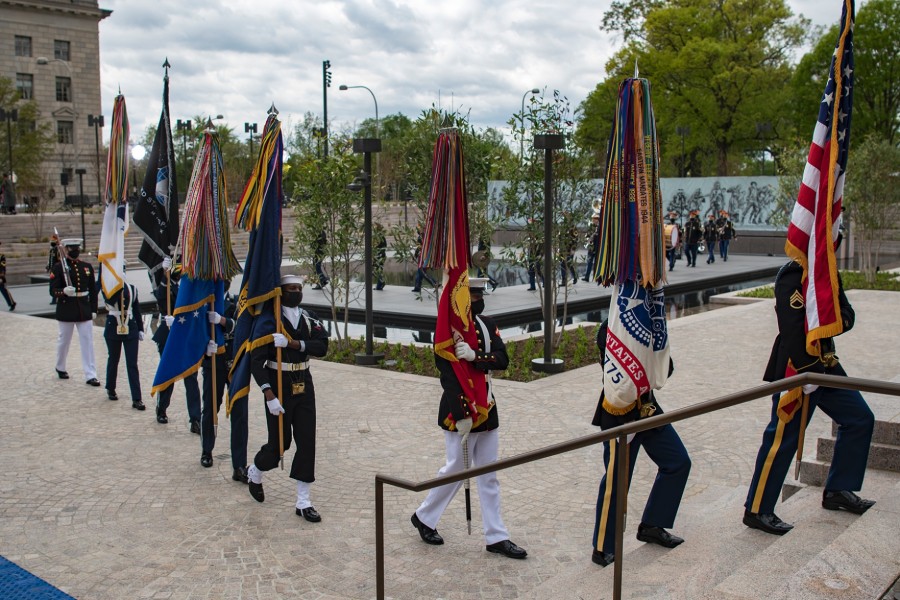 Members of a military ceremonial honor guard march off followed by members of the U.S. Army Band "Pershing's Own" at the conclusion of a dedication ceremony for the World War I Memorial in Washington, D.C. on Friday, April 16, 2021.

Another national memorial comes to DC, this time to pay tribute to those who served in World War I

By Carlos Bongioanni
via the Stars and Stripes newspaper web site

WASHINGTON — It’s officially open, but the new World War I Memorial in the nation’s capital is far from complete.

The central design element for the $42 million memorial is a roughly 60-foot long, 12-foot high sculpture wall that will feature nearly-life-size men and women, depicting various aspects of wartime life. But the sculptures won’t be completed and added to the wall until 2024. In the meantime, a canvas with artists’ sketches of the future sculpture hangs on the wall.

The site for the new memorial was previously known as Pershing Park, and some elements of the old park have been preserved and incorporated into the new. A statue of Gen. John J. Pershing and two memorial walls with engravings of pertinent information about the war remain on the southeast corner of the memorial. Known as the General of the Armies, Pershing returned home a national hero after he commanded the American Expeditionary Forces on the Western Front in World War I.

When Pershing Park was built, the general was the main focus of the park named after him. The new memorial seeks to expand the scope of the tribute to include a broad array of people who served during the war.

In a “first Colors” ceremony on Friday, the U.S. flag was raised over the site for the first time, as the former city park took on an elevated status as a “National” memorial, although the National Park Service will not be responsible for the memorial’s upkeep.

The U.S. Army Band “Pershing’s Own” and a ceremonial military honor guard were on hand as military members raised the flag, and an Army musician played taps on a bugle that belonged to Gen. Pershing. Soon after, two F-22 Raptors roared overhead to pay tribute.

Attendees at Friday’s event were treated to about an hour of prerecorded remarks from celebrities, politicians and a number of influential people who helped bring the memorial to fruition. President Joe Biden noted how fitting it was to recognize the sacrifice of those who went through the “horror” of a war that involved, among other things, chemical weapons and gruesome fighting from trench to trench.

“In some ways, the Great War shifted America’s thinking about ourselves and redefined our place in the world,” Biden said.

Marine veteran Chris Kuhns and his wife, Gabrielle, volunteered to attend the event as World War I reenactors. He wore a WWI-era Marine Corps uniform, while she wore an outfit to portray a Salvation Army Doughnut Girl.

“This is incredibly important to both of us. We both have family members who fought in the war,” said Chris Kuhns.