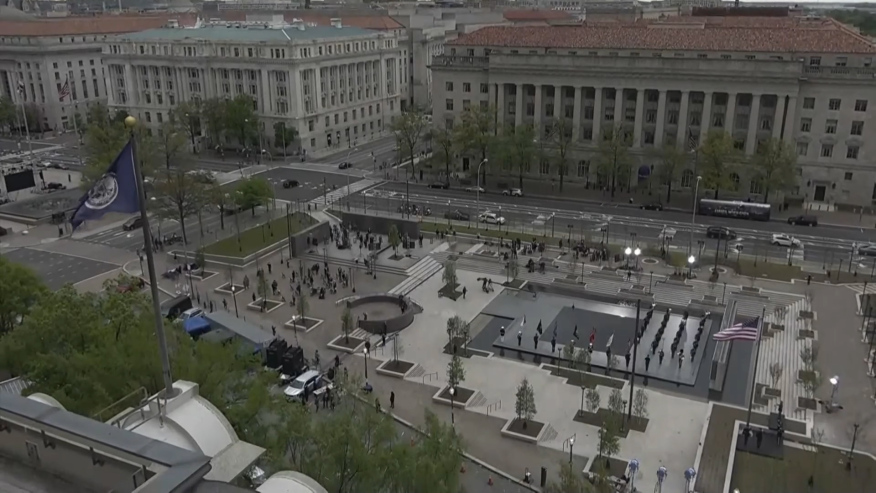 On April 16, 2021, the World War I Centennial Commission, in partnership with the National Park Service, the American Battle Monuments Commission, and the Doughboy Foundation, raised the flag of the United States of America over the new National World War I Memorial. on Washington, DC.

WASHINGTON (WDVM) — Pershing Park is now the memorial site of World War I.

The memorial site lays on now-former Pershing Park, which is near the White House on Pennsylvania Ave. The Pershing Park was opened in 1981, named after the Army General John Pershing who fought in World War I, but the park had been recreational use only for the district residents.

A few months later in May 2015, the Commission launched an open, two-stage international design competition to redevelop Pershing Park as a World War I memorial. The Commission was looking for a design of a memorial that would “take its rightful place next to the National Memorials to the other wars of the 20th century.”

“The Commission sought a memorial that would convey the significance of World War I in national and world history, as well as the character of American service in the war and the scale of American sacrifice,” stated on its website. According to the Commission, more than 350 entries received and five were chosen to advance to a second stage by an independent jury of experts. In January of 2016, the commission chose the design concept submitted by architect Joseph Weishaar, and sculptor Sabin Howard.

Construction of the World War I Memorial began on December 19, 2019.

On April 16, 2021, the WWICC, in partnership with the National Park Service, the American Battle Monuments Commission, and the Doughboy Foundation, raised the flag of the United States of America over the new National World War I Memorial.

Read the entire article on the WDVM web site here: