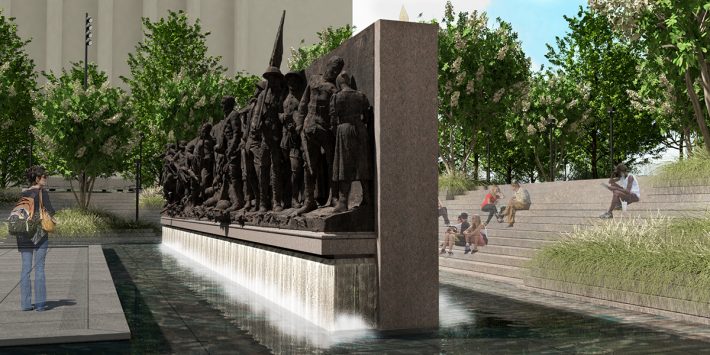 The National World War One Memorial opened in Washington, DC on April 17. The sculpture is still being finalized. CREDIT COURTESY OF: THE U.S. WORLD WAR ONE CENTENNIAL COMMISSION

Until now, our nation’s capital has never had an official tribute to the 4.7 million Americans who served in World War I. After winning a design competition held by the World War I Centennial Commission, Atlanta architect Joe Weishaar lead the creation of the new memorial which opened in Washington, D.C. earlier this month. He joined “City Lights” host Lois Reitzes via Zoom to talk about the process of designing this tribute to America’s soldiers.

“It wasn’t until the Vietnam Memorial in 1982 that we really started building national memorials, and once that process started, it really went in reverse chronological order,” said Weishaar. “It wasn’t until we had no living veterans that we got around to building the World War I Memorial.”

Weishaar, born in a small town in Arkansas, confessed that he knew little about the war before the memorial project.

“This entire process has been a re-education in the war … There was this entire piece of world history that I seemed to be missing,” said Weishaar. “There’s a great, I would say almost overlooked, amount of both technology and global influence that we still feel today from World War I. Its impacts were ever-reaching.”

The memorial will feature a sculpture called “A Soldier’s Journey,” created in collaboration with sculptor Sabin Howard. The finalized sculpture is expected to be completed in 2024. Its 38 bronze relief figures will depict a soldier who leaves his family, fights and loses comrades in the conflict, and returns home wounded.

“When it’s completed, it will be the largest bronze high relief in the Western hemisphere. It’s absolutely enormous,” said Weishaar. Howard and Weishaar’s team worked with film studios, using augmented reality technology, to perfect the poses of the sculpture’s figures. Howard is using 3D-printed armatures as foundational structures for each piece.

Located in Pershing Park in Washington D.C., the memorial currently displays Howard’s original illustration for the sculpture-in-progress, and features a peace fountain, pool basin, newly landscaped plazas, and groves of trees. There are educational resources throughout the memorial, including an app for iPhone and Android that visitors can use as a guide.

Read the entire article and listen to audio on the WABE web site here: