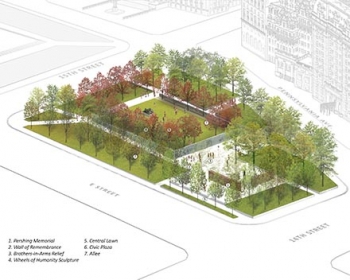 WASHINGTON, DC -- The U.S. World War I Centennial Commission has picked 'THE WEIGHT OF SACRIFICE" for the new national World War I Memorial project.

"THE WEIGHT OF SACRIFICE" was selected from a group of five Finalists, and culminates an open, international design competition that has run since May, 2015. The Commission's decision endorses the recommendation of the design competition's independent jury.

“We were thrilled by the quality and creativity by all the submissions in this competition” stated Commissioner Edwin Fountain, who directed the competition. “This selected design concept reflects a high level of professional achievement”.

Imagery of "THE WEIGHT OF SACRIFICE", and of the other four Finalists, can be found here: www.ww1cc.org/selection

The design concept was submitted by Joseph Weishaar, an architect-in-training currently located in Chicago, IL, and collaborating artist, veteran sculptor Sabin Howard, of New York, NY. Mr. Weishaar, received his professional architecture degree at the University of Arkansas in 2013. 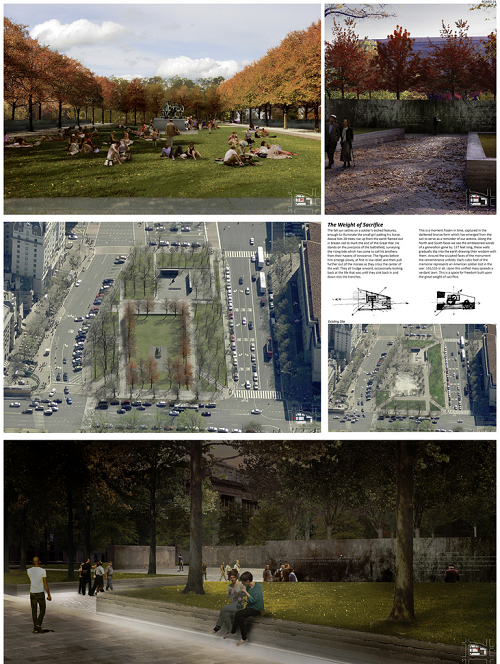 Regarding the World War I Memorial, Commission Chair Robert Dalessandro stated “Those five million Americans who served in uniform during World War I literally changed the world. This new landmark in our nation's capital will be a worthy expression of their great legacy”.

The location for the new World War I Memorial is Pershing Park, in downtown Washington, DC, bounded by Pennsylvania Avenue and 14th and 15th Streets NW. The park is located one block from the White House, adjacent to the Willard Hotel and the District of Columbia’s Wilson Building.

This site was designated by Congress in 2014. The Centennial Commission is a Congressional Commission set up in 2013 to ensure a suitable observation in the United States of the centennial of World War I.

"THE WEIGHT OF SACRIFICE" will continue to develop as a design, with help from the Centennial Commission, the National Park Service, the U.S. Commission of Fine Arts, the National Capital Planning Commission, the D.C. Office of Historic Preservation, the General Services Administration, and other stakeholders. Ultimately, the design will need to meet a number of criteria related to site considerations, environmental impact, historical preservation, sustainability, and cost.

The Centennial Commission's goal for creating the memorial is to begin construction by November 2017, and dedicate the completed memorial in November 2018. Estimated cost is $30-35 million, which will come entirely from private donation.