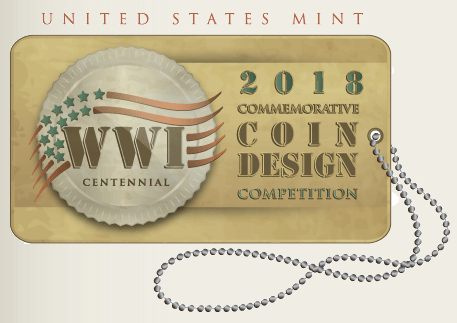 To commemorate the centennial of America's involvement in World War I, the United States Mint is calling on American artists to design a coin, to be issued in 2018, that will honor the accomplishments of heroes on the front line and the home front. The coin will serve as a tribute to the bravery, actions and sacrifices of Americans a century ago, while providing a tangible touch point for generations to come.

The competition is open to U.S. citizens and permanent residents who are at least 18 years or older. During Phase One of the competition, which is open from February 29–April 28, 2016, artists are encouraged to submit their contact information and three to five work samples using the online form on the Mint web site.

Up to 20 applicants from Phase One will be selected to participate in Phase Two, where they will create and submit designs and plasters for the final coin. The winner will not only have his or her initials on the final coin, but will also receive a $10,000 prize.

“The World War I American Veterans Centennial Commemorative Coin Design Competition is an exciting opportunity for American artists to design a coin that will preserve an important time in American history and convey a sense of pride,” said Rhett Jeppson, Principal Deputy Director of the Mint. “World War I required the entire nation to get behind their armed forces. This truly is an opportunity to capture the sentiment and patriotism of the time. The coin will help future generations understand and appreciate the impact of what was called “the war to end all wars.”

The Coin Design Competition is an opportunity for American artists to inspire people with the bravery, actions and sacrifices of Americans, as well as encouraging future generations to remember and appreciate the history of World War I.