COLUMBUS, NM -- Some 200 Columbus Raid descendants and friends were in attendance for ceremonies marking the 100th Anniversary of the Pancho Villa Raid in Columbus on the morning of March 9, 2016. 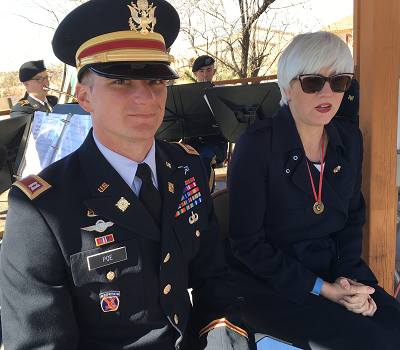 After the presentation of colors by the US Border Patrol Color Guard Team, Richard Dean, President of the Columbus Historical Society, was the first speaker of the morning.  "The caskets were loaded on the train -- one -- by --- one." Dean said in a slow, measured tone. Richard is a native of Columbus and an authority on Pancho Villa's pre-dawn raid on the slumbering little town. He took the audience through the attack, and detailed the killing of each of the ten town residents who died in the raid. He took the attendees back to that morning of one hundred years ago, and we could all deeply feel the town's anguish. There also was a heavy sense that after all these years the wounds had not completed healed.

Dean then introduced the next speaker and honored guest, Helen Patton, granddaughter of the great WWII general. Helen lives in Reims, France and traveled to Columbus for this commemoration. Villa's raid initiated the US Army's response with the Punitive Expedition, commanded by General John J. Pershing. Helen's grandfather, George S. Patton, Jr. had been General Pershing's Aide. She brought life and spirit to the podium when she recited (or rather performed) the poem Marching in Mexico written by her grandfather while in Mexico.  As Helen recited the poem with such energy and spirit - history came alive! 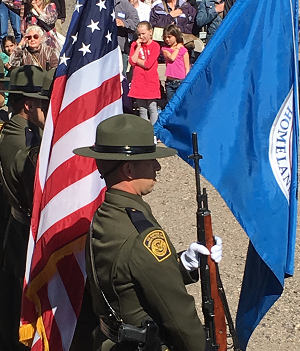 She then sang "Amazing Grace" and the crowd was spell-bound as her beautiful voice was carried by the wind.

Next came Captain David Poe, who was representing the Pershing family and the Pershing Rifles. He read to the crowd a commemorative letter written by Mrs. Sandra Pershing, the widow of COL John Warren Pershing, the grandson of the great general.

After the official ceremonies ended, many of the family members lingered to renew old and make new acquaintances.

Jeff Lowdermilk is a writer and photographer. His book HONORING THE DOUGHBOYS: Following My Grandfather’s World War I Diary, was published in 2014.