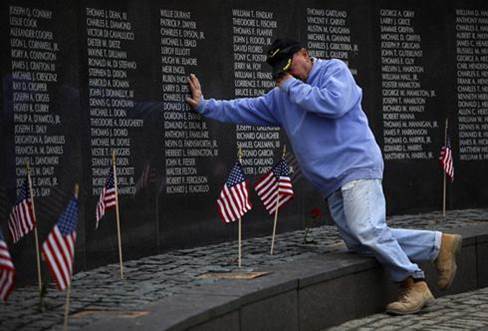 The nation's memorial landscape changed dramatically in 1982, with the dedication of the Vietnam Veterans Memorial in Washington DC, on the National Mall adjacent to the Lincoln Memorial. This memorial did not honor generals or presidents but rather the common soldier, represented in the famous wall listing the names of all American servicemen and women killed or missing in the war, supplemented by a nearby statue of three soldiers.

Working in reverse chronological order, memorials were subsequently added on the Mall to the veterans of the Korean War (dedicated 1995) and World War II (dedicated 2004). As with the Vietnam Veterans Memorial, these later memorials focus not on generals or statesmen but on the rank and file, represented in the

Korean War Memorial by statues of 19 soldiers and by faces and other images etched on an adjoining wall, and in the World War II Memorial by an array of 4,000 stars, each star representing 100 Americans lost during the war.

Thus of the four great wars fought by the United States in the 20th century, the latter three are commemorated by national war memorials on the National Mall in Washington DC. No such memorial exists for World War I.