America in the Great War

On June 28, 1914, the Archduke Franz Ferdinand, heir apparent of the Austro-Hungarian Empire, was assassinated in Sarajevo by a Serbian nationalist. Within five weeks, the conflict between Austria-Hungary and Serbia had ignited a continental war involving all the major powers of Europe. While the major combatants were the "Triple Alliance" (or "Central Powers") of Germany, Austria-Hungary and the Ottoman Empire facing the "Triple Entente" (or "Allies") of France, Russia and Britain, in time the war would involve dozens of nations and touch every continent and ocean across the globe. By the time an armistice was declared four years later, on November 11, 1918, ten million soldiers and another six million civilians had died.

The United States initially remained neutral, and declared its intention to stay out of the war and to continue trade relationships with all combatants. Sentiments among the American people favored both sides to the war, and were divided between intervention and neutrality. But reports of German atrocities, along with attacks by German submarines on shipping bound for Britain and France – most infamously the sinking of the British liner S.S. Lusitania which killed 128 American passengers – began to strengthen American feeling toward the Allies. 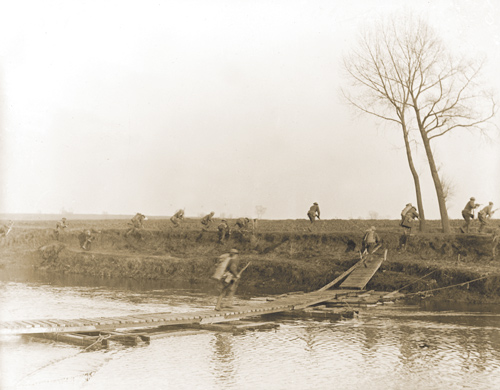 In early 1917, Germany's resumption of unrestricted submarine warfare against American ships, along with the "Zimmerman telegram" proposing an alliance between Germany and Mexico against the United States, forced President Woodrow Wilson – who had won re-election in November 1916 on the slogan "He kept us out of war" – to reverse his policy of neutrality and ask Congress for a declaration of war. On April 6, 1917, the United States declared war on Germany.

Before the war, the United States had a standing army of only 100,000, supplemented by 120,000 National Guard members. By war's end, 4.7 million American servicemen—and, for the first time, servicewomen—had answered their nation's call and joined the U.S. Army, Navy, or Marine Corps. Never before in its history had the United States entered an international conflict in such force.

The first American troops landed in France in June 1917. In memory of French aid to the American colonies during the American Revolution, General John J. Pershing, the commander of American troops in Europe, led a delegation to lay a wreath on Lafayette's grave outside Paris, where one of his aides famously proclaimed, "Lafayette, we are here!" 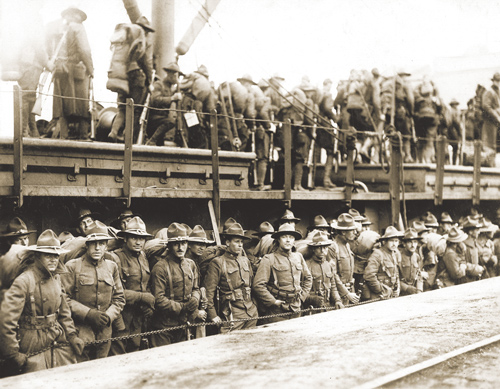 Another Lafayette reference can be found in the Lafayette Escadrille, a squadron of American aviators who enlisted alongside the French in the years before the United States formally entered the war. Thousands of American men joined the Canadian, British and French forces, with four of them earning the British Victoria Cross. Thousands more men and women flocked to Europe to assist in nursing and other humanitarian relief efforts, most notably future President Herbert Hoover who chaired the Commission for Relief in Belgium.

The first American troops initially served in primarily defensive positions along the Western Front, while new units underwent training in the U.S. and in France before going to the front. On November 3, 1917, Corporal James Gresham and Privates Thomas Enright and Merle Hay became the first American soldiers to die in the war. American troops conducted their first major offensive action on May 28, 1918, when the U.S. First Division rolled back a German salient at the town of Cantigny and then held it against several German counter-attacks. 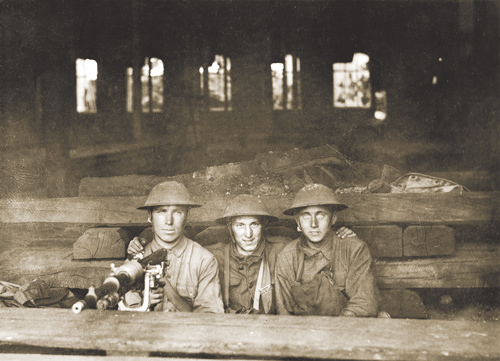 Soon after the victory at Cantigny, American forces were deployed at other points along the line where the Germans, with new troops arriving from the Eastern Front after the Russian Revolution and Russia's withdrawal from the war, were conducting a major offensive intended to defeat the French and British forces before their reinforcement by an expected two million American soldiers. A number of battles in this campaign have become part of American military lore, including the battle of Chateau-Thierry 50 miles north of Paris, where in early June 2018 the U.S. Third Division won the name "Rock of the Marne" for its defense of bridgeheads over the strategically important Marne River, and the battle of Belleau Wood later that month, where the Second and Third Divisions, including a brigade of U.S. Marines, drove German forces out of the Belleau Wood after weeks of savage fighting.

Not only is Belleau Wood seen as the birth of the modern Marine Corps – marking as it did the first use of Marines as a major fighting force on land, rather than ship-bound defensive and amphibious units – but it yielded two of the great battle cries in American history. After Marines were urged to turn back by retreating French forces, Captain Lloyd W. Williams uttered the now-famous retort "Retreat? Hell, we just got here!" And Gunnery Sergeant Dan Daly, a two-time recipient of the Medal of Honor for actions in China in 1900 and Haiti in 1915, led the men of his company forward with the words: "Come on, you sons of bitches, do you want to live forever?" 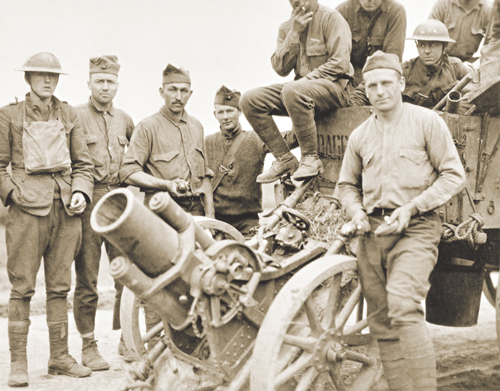 Beginning in September 1918, American forces played a key role in the counter-offensive that drove the Germans out of positions they had held since the end of 1914 and eventually compelled the Germans to sign the armistice that ended the war. In the battle of the St. Mihiel Salient, the U.S. pushed German forces out of a bulge in the front line around the town of St. Mihiel, which had blocked communications between the cities of Nancy and Verdun, and which had been the site of repeated fighting during the war. In four days, half a million American troops, supported by the French, took back territory the Germans had held for almost four years.

In a feat of logistical planning by then-Colonel George C. Marshall, who would go on to serve as Chief of Staff of the U.S. Army during World War II, the American forces pivoted from St. Mihiel to positions 50 miles away to participate in the Meuse-Argonne Offensive, part of the final Allied offensive of World War I that stretched along the entire Western Front. It was fought from September 26, 1918, until the Armistice on November 11, a total of 47 days. The battle was the largest in United States military history, involving 1.2 million American soldiers. It was in the Meuse-Argonne that Sergeant Alvin York famously captured 132 German soldiers. 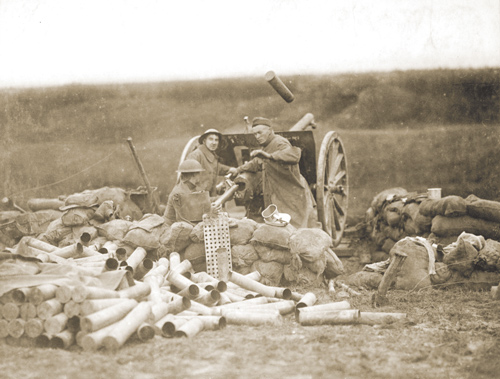 The Meuse-Argonne also witnessed the celebrated stand of "the Lost Battalion," 550 men of the 77th Division under the command of Major Charles Whittlesey, who in October 2018 unknowingly advanced well beyond the allied units to either side of them, and thus found themselves completely cut off and surrounded by German forces. For six days, the men fought off repeated attacks by the Germans. Food and ammunition were short; water was available only by crawling under fire to a nearby stream; and bandages were taken off the dead and re-used on the wounded. In addition to hand-to-hand fighting and mortar and grenade attacks from the Germans, at times the unit was bombarded by shells from their own artillery. Roughly 200 were killed in action and approximately 150 missing or taken prisoner; the remaining 200 men held out until other Allied units broke through the German lines, which forced the Germans to retreat. Major Whittlesey, who was promoted to lieutenant colonel, received the Medal of Honor, and served as a pallbearer for the Unknown Soldier, took his own life in 1921. 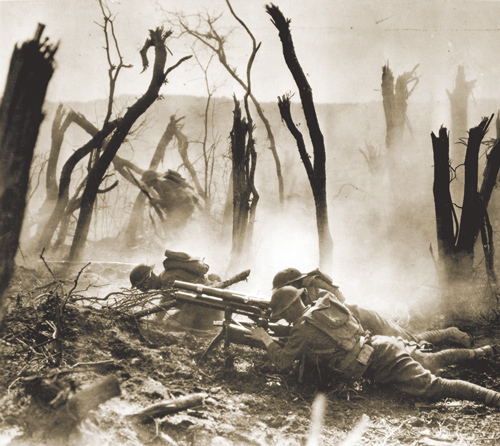 In seven weeks in the Meuse-Argonne, more than 26,000 American soldiers died and another 96,000 were wounded – compared to 8,400 American dead in six weeks in the Battle of the Bulge, and almost as many as during the entire three years of the Korean War.

Although the Meuse-Argonne was only part of an offensive along the entire 400 miles of the Western Front, the significant commitment of fresh and eager (albeit inexperienced) American troops signaled a strengthened resolve on the part of the U.S. and its allies and dimmed German hopes for eventual victory. Paul von Hindenburg, the chief of the German general staff, declared that, along with the British food blockade, "the American blow in the Argonne decided the war for the allies."