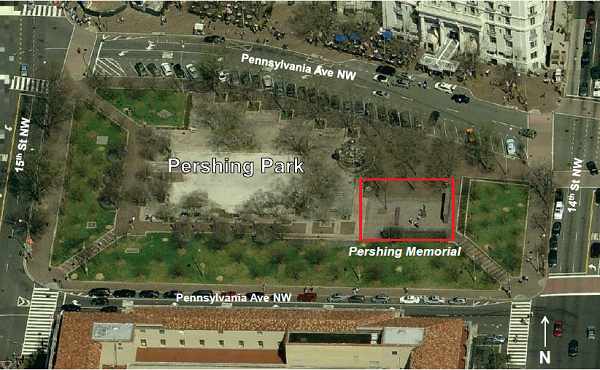 In its current configuration, Pershing Park is an urban open space that contains commemorative elements as a secondary feature. While the memorial to General Pershing is a contributing element within the Pennsylvania Avenue National Historic Site, the memorial function of Pershing Park as presently designed is diminished because the Pershing commemorative elements, including a 12-foot bronze statue of General Pershing and adjacent granite walls inscribed with maps and text, are located in a small corner of the site; are not well-integrated into the rest of the park; and do not focus on the service and sacrifice of American servicemen and women in the war.

Pershing Park was designed by noted landscape architect F. Paul Friedberg and Partners. The park was constructed by the Pennsylvania Avenue Development Corporation as part of the improvements to Pennsylvania Avenue. Opened to the public in 1981, the park was subsequently assigned to the National Park Service to administer and maintain.

At its inception, the park was an enjoyable urban space. Today, however, enjoyment of the park has been compromised and the park now falls short of its original vision. The central feature of the park design – a large, sunken area containing an ornamental pool in the summer and an ice-skating rink in the winter – is no longer used or maintained for those purposes. As a result, the park landscape is dominated by a flat, concrete square in the center of the site, and by an abandoned concession gazebo, which detract from the site as both a park and a memorial. Equally problematic are the high earthen berms along 14th, 15th and E Streets, and the parked vehicles along the north edge of the site, which make it uninviting and even invisible to passersby, although the berms visually and acoustically shield the park from street traffic and noise, and thus provide a sense of quiet containment. 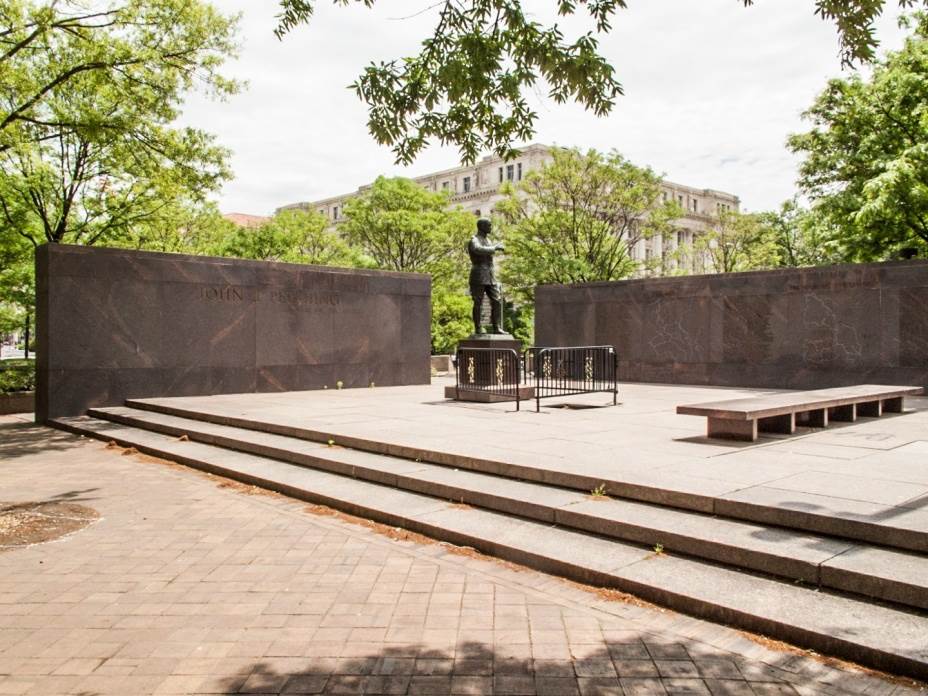 The southeast corner of the park, at the intersection of E and 14th Streets, includes a memorial to General John J. Pershing, commander of the American Expeditionary Forces in World War I, and to the officers and men under his command, which was authorized by Congressional legislation in 1966. The memorial area, a platform space of granite pavers approximately 70 feet by 60 feet, includes a statue of General Pershing, flanked by two granite walls, perpendicular to each other, inscribed with texts and maps describing American actions in World War I directed by General Pershing.

In recent years, the park has experienced degradation due to failure of mechanical systems servicing the pool and skating rink, and vegetation growth adversely affecting the perceived security and welcome-ness of the park. 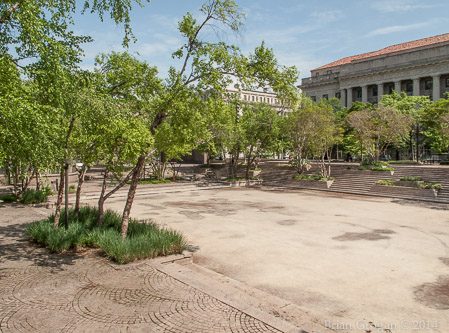 The park's urban context is varied, and has changed significantly since the park's opening. To the west are the White House grounds, including the Ellipse, the Treasury Building, and an equestrian statue of Civil War General William Sherman immediately across 15th Street. To the north, across Pennsylvania Avenue, the historic Willard Hotel and Hotel Washington were redeveloped, and an office building complex built between them, while other office buildings and the J.W. Marriott Hotel were constructed on the block to the northeast. Freedom Plaza, approximately 2 acres of primarily hardscape open space, was built concurrently to the east. A White House Visitor Center was installed in the Department of Commerce Building to the south.

Further description of Pershing Park and its environs may be found in the 2007 National Register of Historic Places Registration for the Pennsylvania Avenue National Historic Site, available on the Competition Website. Other materials are also available on the website, including as-built plans for Pershing Park; photographs of the site in its current condition; a site diagram showing pedestrian movement patterns, site access, and off-site visual connections; and a
transportation circulation diagram.