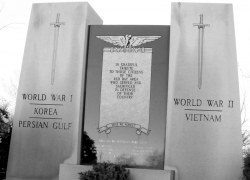 In 2016 the American Legion riders stopped her at the memorial. Here is the article from the local paper

RED BAY – A seemingly endless stream of motorcycles, riding two abreast, roared into downtown Tuesday morning, stopping at the Veterans Memorial.
“It was pretty amazing seeing them coming downtown,” Red Bay Mayor David Tiffin said. “It was just a steady stream. It had traffic blocked for some time, but I don’t think anyone minded.”

The riders were part of the 11th annual America Legion Legacy Run. The riders left Indianapolis Aug. 21 and will travel 1,300 miles over five days through Indiana, Kentucky, Tennessee, Mississippi, Alabama and Georgia before ending Aug. 25 in Harrison, Ohio.
City officials said there were around 400 riders.
“All of the riders were veterans,” said Red Bay Councilman and local banker Brad Bolton. “It was an honor and privilege to host them in Red Bay.”

The ride is an effort to raise money to provide college scholarships for children of parents who died while on active duty military service.
According to American Legion officials, the ride raised $1.2 million last year and more than $6 million since it began in 2006.
“And they have raised $450,000 so far this year,” Bolton said.
He said the veterans came to Red Bay after spending the night in Tupelo, Mississippi. After stopping in Red Bay the group headed to Huntsville.

At Red Bay, they stopped at Veterans Park off Main Street, for a ceremony.
“We had several people from the area there, as well as some of the elementary teachers brought their classes to the park for the ceremony,” Tiffin said.

During the ceremony, the riders placed a wreath on the Veterans Memorial.
American Legion National Commander Dale Barnett, of Georgia, who is making the trip with the motorcycle riders, was presented a key to the city by Tiffin. State Rep. Johnny Mack Morrow, D-Red Bay, read a proclamation passed by the Alabama Legislature.

Tiffin said the stop in Red Bay was not part of the original plans.
“One of the advance riders came into Red Bay about three months ago, saw our Veterans Memorial, and stopped to talk with me,” Tiffin said. “He asked if they could come in and stop here at the memorial as a part of the ride."

“It was a great way to honor our veterans. We’re just thankful they choice to honor us, by stopping here.”

Detecting your location...
No information to be displayed !
David Curott