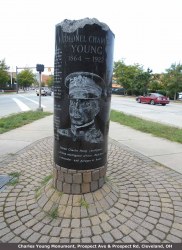 "An American Legend"
"Charles Young was the third black graduate of the United States Military Academy, class of 1889. Young enjoyed a diverse military career as a lieutenant of a cavalry troop squadron, and regimental commander, acting superintendent of a national park, military attaché to Haiti and Liberia, professor at Wilberforce University and military advisor to the President of Liberia.
Colonel Young was a dedicated soldier and statesman. Young is an American legend, a model for youth and adults of all races to emulate. As a 'Buffalo Soldier' he was present on the early westward frontier. At Fort Huachuca, Major Young commanded the 2nd squadron cavalry regiment in the Punitive Expedition against Pancho Villa in Mexico, served in the Spanish American War, and the Philippine Insurrection. On June 22, 1917 Charles Young became the first African American to reach the rank of Colonel.
Young died and was buried in Lagos, Nigeria in 1922 while serving as Colonel in World War One. A year later his remains were returned to the United States and buried with full honors at Arlington National Cemetery. On June 1, 1923 many Americans bade farewell to a distinguished soldier and statesman. " (Robert Ewell Green in Black Courage)

"The life of Charles Young was a triumph of tragedy. No one ever knew the truth about the Hell he went through at West Point. He seldom even mentioned it. The pain was too great. Few knew what faced him always in his army life. It was not enough for him to do well - he must always do better: and so much and so conspicuously better as to disarm the scoundrels that ever trailed him. He lived in the army surrounded by insult and intrigue and yet set his teeth and kept his soul serene and triumphed.
He was one of the few men I know who literally turned the other cheek with Jesus Christ. When officers of inferior rank refused to salute a black man, he saluted them. Seldom did he lose his temper, seldom complain.
Steadily, unswervingly he did his duty. And Duty to him as to few modern men, was spelled in capitals.
Now he is dead. But the heart of the Great Black Race, the Ancient of Days - the Undying and Eternal - rises and salutes his shining memory: Well done! Charles Young, Soldiers and Man and unswerving Friend." (W.E.B. DuBois in The Crisis, February 1992)

"AS soon as the school year was over, I rode on horseback from Wilberforce to Washingotn, walking on foot fifteen minutes in each hour, the distance of 497 miles to show, if possible, my physical fitness for command of troops. I there offered my services gladly at he risk of life, which has no value to me if I cannot give it for the great ends for which the United States is striving." (Colonel Charles Young, age 53, Historic Horseback Ride 1918)

Detecting your location...
No information to be displayed !
Stephen Miller