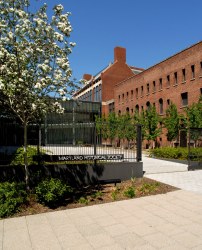 Founded in 1844, the Maryland Historical Society (MdHS) is the state’s oldest continuously operating cultural institution. In keeping with the founders’ commitment to preserve the remnants of Maryland’s past, MdHS remains the premier institution for state history. With over 350,000 objects and seven million books and documents, this institution now serves upward of 100,000 people through its museum, library, press, and educational programs.

In addition to their ongoing mission to preserve and publish Maryland’s history, the leaders of the society took responsibility for recent history. As their predecessors had done after the Civil War, society leaders stood at the forefront of collecting "the relics" of the recent Great War. In 1920, the state legislature formed a committee of three that included former governor and historical society president Edwin Warfield. This group comprised the Historical Division of the state’s War Records Commission and served as the "official organ" of the federal government in collecting and compiling the military records of those Marylanders who served in World War I. Additionally, education ranked as a high priority, and the post-war MdHS reached out to the city’s public schools with teacher workshops and tours.

The H. Furlong Baldwin Library’s collections are both diverse and substantive. The library enables researchers, teachers, and students to see for themselves the records of the past, and to study and learn from its many treasures. The library’s collections include 60,000 books, 800,000 photographs, 5 million manuscripts, 6,500 prints and broadsides, 1 million pieces of printed ephemera, extensive genealogy indexes, and more, reflecting the history of Maryland and its people. These collections are accessible to visitors on-line and at the MdHS campus in Baltimore.