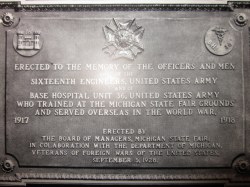 Who trained at the Michigan State Fair Grounds and served overseas in the World War, 1917 1918

Erected by the Board of Managers, Michigan State Fair Grounds, in colaboration with the Department of Michigan, Veterans of Foreign Wars of the United States, September 5, 1928.

This Memorial is lost, it is not at this location.