Michigan's Own Military and Space Museum 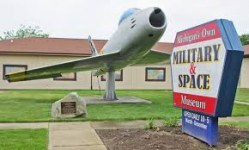 Michigan’s Military & Space Heroes Museum began in 1980 when Stan Bozich opened a small museum in the basement of the School Haus Square building on Main Street in Frankenmuth, Michigan. Determined to make his museum a fitting and lasting place to tell the story of Michigan’s military and space heroes, in 1985, Stan along with a supportive delegation from the city of Frankenmuth, was able to obtain a grant from the State of Michigan to purchase a two acre parcel of land on Weiss Street where the museum could build its future home.

With the financial support of local businesses and families plus veterans groups state-wide, a building was erected on the Weiss Street property and in 1987 the museum’s collection moved into its permanent home, which has since been expanded to enable more of the museum’s collection to be displayed for the thousands of visitors it welcomes each year. Frankenmuth is a popular destination for visitors who come from all over the state of Michigan to enjoy the famous chicken dinners, various festivals, shopping and other attractions in this German-themed town. The next time you plan a trip to Frankenmuth, make it a point to include a visit to the Museum.