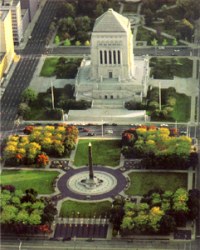 The Indiana World War Memorial Plaza was originally built to honor the veterans of World War I. The five-city-block plaza was conceived in 1919 as a location for the national headquarters of the American Legion and a memorial to the state's and nation's veterans. At the north end of the plaza is the American Legion Mall, which is the site of the administration buildings of the Legion, as well as a memorial cenotaph. South of that is the Veterans Memorial Plaza with its obelisk. Combined, it is the largest war memorial project in the United States.

The centerpiece of the plaza is the Indiana World War Memorial, modeled after the Mausoleum of Halicarnassus, which contains "the Altar of the Flag" in the Shrine Room. There is also a military museum and an auditorium. At the south end is University Park, the oldest part of the plaza, filled with statues and a fountain. On October 11, 1994, the Indiana World War Memorial Plaza was designated a National Historic Landmark District.