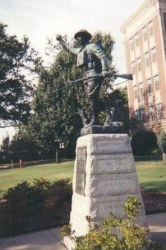 This monument was dedicated in September 1925 and honors the Native Americans of the Five Civilized Tribes who fought in World War I. It was placed in front of the Soldiers Home in Muskogee, Oklahoma which thereafter became the Jack C. Montgomery VA Medical Center. The statue is one of only two E.M. Viquesney Doughboys honoring Native Americans (the other is in Bullhead, SD).  ERECTED IN COMMEMORATION OF MEMBERS OF THE FIVE CIVILIZED TRIBES, WHOSE RECORD OF ENLISTMENT, CONDUCT IN CAMP, AND FORTITUDE AND VALOR ON THE BATTLEFIELD, ADDED LUSTRE TO THE TRIUMPHANT VICTORY OF OUR COUNTRY IN THE WORLD WAR.  Descending engravings on the blocks on both sides of the monument are the names of the Five Civilized Tribes: CHICKASAW, CHOCTAW, SEMINOLE, CHEROKEE, CREEK. Descending on the blocks on the back are engravings naming historically famous leaders of the tribes: COLBERT, PUSHMATAHA, OCEOLA, SEQUOYAH, OPOTHLE-YAHOLA.

Detecting your location...
No information to be displayed !
Single figure -- soldier
Vandelia Graham