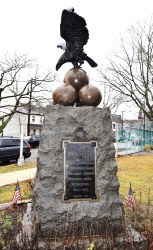 Built as a memorial to Bordentown residents who served in World War I, this monument originally sat in the middle of Walnut Street.  Today, it is located on the Post Office property corner, facing Walnut Street.

It consists of a flat, rectangular granite slab with rusticated edges topped by a tapering quarry-faced, granite slab, square in cross-section. A pyramid of five, bronze cannon balls rests atop the slab, and serves as a perch for a bronze eagle, depicted with wings outstretched.  Bronze plaques on the faces of the slab honor residents who served in WWI and later wars.

In June 1924, a local committee was formed to plan Bordentown's commemorative monument. Resident Frank Thompson sketched a rendering of a proposed monument and construction began in late October. The memorial was dedicated on Armistice Day 1924 with an address by the noted war correspondent, Dr. Herbert Adams, of Princeton, NJ.