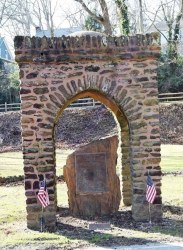 After World War One, the Patriotic Order of Sons of America (POSA) in Bridgeton, NJ planted an avenue of trees to honor the Cumberland County war dead.  A monument was erected of a Gothic-arched, stone canopy containing a bronze plaque honor roll, explaining the memorial.

The canopy is constructed of random courses of mortared stones with oblong stone voissours outlining the four sides with arch springs.  The canopy is crowned by two courses of horizontal stone & a top course, set vertically.

The plaque is mounted to the face of an irregular stone slab.  The names of the soldiers are introduced with the following text:  "This avenue of trees is planted by the POS of A as a living memorial to those heroes from Cumberland County District No. 1 who died int he services of country and community during the Great World War, 1917-1918."