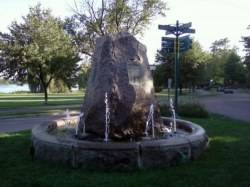 Peavey Fountain on the Lake of the Isles in Minneapolis was built in 1891 as a drinking fountain for horses and was later dedicated to the horses of the 151st Field Artillery, Minnesota National Guard who died during World War I.

In 1891, Frank Hutchinson Peavey donated the fountain to the people of Minneapolis as a drinking fountain for horses. In 1917 it was rededicated as a memorial to the horses of the 151st Field Artillery Minnesota National Guard killed in action. Today, Peavey Fountain would be easy to miss standing in the middle of an island diverting car traffic between Kenwood Parkway and Lake of the Isles Parkway.

I recommend visiting the Minnesota Historical Society website to travel back in time to see what the fountain and neighborhood looked like in the early 1900s. I was curious about the fountain’s connection to Peavey Plaza in downtown Minneapolis and learned that the company Frank started in 1874, F.H. Peavey & Company (renamed Peavey Company) gave $600,000 towards the $2.5 million budget for the plaza which earned them naming rights. The gift was given in 1974, the company’s centennial year.

Detecting your location...
No information to be displayed !
Frank Hutchinson Peavey