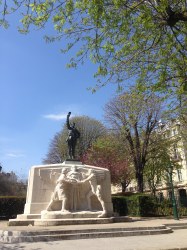 On 4 July 1923, the President of the French Council of State, Raymond Poincaré, dedicated this monument in the Place des États-Unis to the Americans who had volunteered to fight in World War I in the service of France. The monument, in the form of a bronze statue on a plinth, executed by Jean Boucher (1870–1939), was financed through a public subscription.  Boucher used a photograph of the soldier and poet, Alan Seeger, as his inspiration, and Seeger's name can be found, among those of twenty-three others who had fallen in the ranks of the French Foreign Legion, on the back of the plinth. Also, on either side of the base of the statue, are two excerpts from Seeger's "Ode in Memory of the American Volunteers Fallen for France", a poem written shortly before his death on 4 July 1916. Seeger intended that his words should be read in Paris on 30 May of that year, at an observance of the American holiday, Decoration Day (later known as Memorial Day):

Yet sought they neither recompense nor praise,
Nor to be mentioned in another breath,
Than their blue coated comrades whose great days
It was their pride to share—ay, share even to the death!   [...]

Hail, brothers, and farewell; you are twice blest, brave hearts.
Double your glory is who perished thus,
For you have died for France and vindicated us