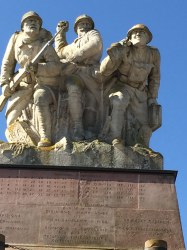 This memorial was erected above the remains of thousands of soldiers who could not be properly identified after the battle that occurred here in 1915 (and in subsequent battles over the same ground in 1916-1918). The American volunteers in both the 2nd and 3rd companies of the Foreign Legion's 1st Regiment, and the 2nd company of the Foreign Legion's 2nd Regiment, fought here. Henry Farnsworth was killed by enemy fire in the 1915 battle..

The three-figured statue was designed by the French sculptor, Maxime Real Del Sarte. It was dedicated in 1924.

The pyramid-shaped memorial sits atop a hill. It commands quite a view. In the area around the memorial there are remnants of the trenches, bouyeaux, and barbed wire from World War I. There are also multi-lingual signs explaining the history of the fighting at Navarin Farm and in other nearby areas of Champagne.

The poet, Alan Seeger, wrote his poem "Maktoob" while serving in Champagne. He wrote of the chalky white soil. Here one can see and touch the soil for one's self.

The poem "Maktoob" by Alan Seeger (this is my favorite poem by Seeger, I read it with my students each spring when they are studying World War I):

A shell surprised our post one day
And killed a comrade at my side.
My heart was sick to see the way
He suffered as he died.

I dug about the place he fell,
And found, no bigger than my thumb,
A fragment of the splintered shell
In warm aluminum.

I melted it, and made a mould,
And poured it in the opening,
And worked it, when the cast was cold,
Into a shapely ring.

And when my ring was smooth and bright,
Holding it on a rounded stick,
For seal, I bade a Turco write
Maktoob in Arabic.

Maktoob! "'Tis written!" . . . So they think,
These children of the desert, who
From its immense expanses drink
Some of its grandeur too.

Within the book of Destiny,
Whose leaves are time, whose cover, space,
The day when you shall cease to be,
The hour, the mode, the place,

Are marked, they say; and you shall not
By taking thought or using wit
Alter that certain fate one jot,
Postpone or conjure it.

Learn to drive fear, then, from your heart.
If you must perish, know, O man,
'Tis an inevitable part
Of the predestined plan.

And, seeing that through the ebon door
Once only you may pass, and meet
Of those that have gone through before
The mighty, the elite -- ---

Guard that not bowed nor blanched with fear
You enter, but serene, erect,
As you would wish most to appear
To those you most respect.

So die as though your funeral
Ushered you through the doors that led
Into a stately banquet hall
Where heroes banqueted;

And it shall all depend therein
Whether you come as slave or lord,
If they acclaim you as their kin
Or spurn you from their board.

So, when the order comes: "Attack!"
And the assaulting wave deploys,
And the heart trembles to look back
On life and all its joys;

Or in a ditch that they seem near
To find, and round your shallow trough
Drop the big shells that you can hear
Coming a half mile off;

When, not to hear, some try to talk,
And some to clean their guns, or sing,
And some dig deeper in the chalk -- -
I look upon my ring:

And nerves relax that were most tense,
And Death comes whistling down unheard,
As I consider all the sense
Held in that mystic word.

And it brings, quieting like balm
My heart whose flutterings have ceased,
The resignation and the calm
And wisdom of the East.