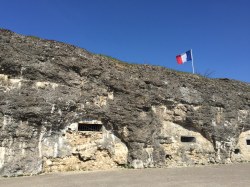 Along with Fort Douamont, Fort Vaux was the site of some of the most intense fighting of the months-long Battle of Verdun in 1916. A contingent of the American volunteers fought here as part of the 170th Regiment after having transferred from the Foreign legion in the aftermath of the Champagne Offensive of 1915. Frank Musgrave of San Antonio, was assigned to another unit after recovering from wounds, and was captured by the Germans while defending the village of Vaux below the fort. His friend, Jack Janz of Philadelphia, was killed by artillery fire at Fort Vaux.

The 170th also fought nearby in the Bois de la Caillette. From the top of Fort one can easily grasp the strategic significance of commanding the heights east of the ancient city of Verdun.