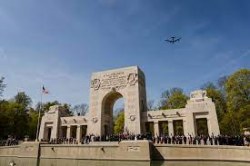 More than 250 American pilots fought with the French Air Service before the United States joined the war, either in existing squadrons with French pilots, or as one of the 38 pilots who flew in the all-American Lafayette Escadrille squadron. The Memorial commemorates the courage and the sacrifice of all these American pilots who came to France before April 1917, collectively called the “Lafayette Flying Corps”.

The 68 members of the Lafayette Escadrille and the La Fayette Flying Corps who died in WWI, or after the war as a result of their wounds, are buried in the crypt located under the central arch of the Memorial. They lie in a broad semi-circle, each under a cenotaph bearing the pilot’s name and date of death. Their French commanders, Georges Thénault and Antonin Brocard, who died respectively in 1948 and 1950, wanted to be buried with their American comrades.

The monument is located in the Parc de Saint Cloud, in Marnes-la-Coquette, half-way between Paris and Versailles. The monument is composed of a central monumental arch, half the height of the Arc de Triomphe in Paris.

On the façade of the monument are the names of the 68 pilots of the Lafayette Escadrille and the Lafayette Flying Corps who died in World War I.