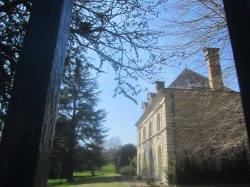 The American volunteers of the 2nd company of the 2nd Legion regiment were stationed in the ruins of this elegant chateau during the first winter of the war. The sous-officier of German extraction that helped the Americans learn how to become legionnaires, a man by the name of Weidemann, was killed by enemy fire in a skirmish near the chateau. His fellow German countrymen bashed his head in with rifle butts then howled in derision at the legionnaires. Weidemann's past was a mystery. He could have left the Legion, or requested a colonial posting, when the war broke out rather than fighting Germany, but even more mysteriously he chose to stay.The volunteers never forgot him.

Today, the chateau is a reconstruction of the building which stood on the site during World War I. Even by the time the Americans first glimpsed it on a moonlit night in 1914, the roof had already been blown off. The Germans had overrun the nearby village of Craonelle and the wooded area around the chateau in the early days of the war, only to be driven back (at least partly) by a ferocious French counterattack. The village and the ridge above (the Chemin des Dames) represented the front lines in this remote region of France.

The chateau can be reached via a winding dirt road through a forest. The ground's keeper is M. Jean-Luc Despocq. I would recommend writing him in advance before showing up to visit the chateau. He is very knowledgeable about the history of this famous locale. He can be reached via mail at:  Chateau du Blanc Sablon, 02160 Craonelle, France.