All Wars Memorial to Colored Soldiers and Sailors 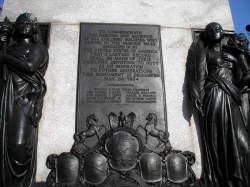 Photos and description courtesy of waymarking.com

The front of this vertical granite monument is adorned with an allegorical female figure representing "Justice" flanked by two groups of three African-American officers, soldiers and sailors representing those from Pennsylvania who served in American wars. The figure of Justice is dressed in long flowing robes and wears her hair pulled back and braided around her face. She stands on a low stepped platform holding up a small wreath in each hand to represent Honor and Reward. The African-American Servicemen are dressed in the uniforms of the various branches of the military. On the back of the monument four allegorical female figures, representing the principles for which wars are fought, flank a bronze tablet. On the proper left of the tablet stands "War" holding a shield and wearing a helmet. Next to her stands "Liberty" carrying a torch and wearing the headdress of the Statue of Liberty. On the proper right of the tablet stands "Peace" carrying a large palm frond. Next to her stands "Plenty" holding a filled cornucopia. The monument is topped with a bronze Torch of Life surrounded by four eagles.

Detecting your location...
No information to be displayed !
Single figure -- soldier
IAS PA000002