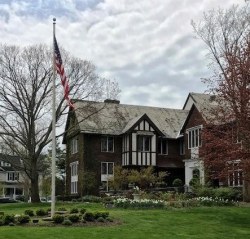 The Spring Lake Community House is one of a small number of functional memorials constructed in New Jersey.  It was dedicated to those who served in World War I and as a center for the community for 'social and educational purposes.'

Funds for the Community House were donated by Oliver H. Brown, a prominent Spring Lake civic leader, politician and philanthropist.  He was elected in 1896 to the NJ State Assembly,and served as a delegate to the 1900 Republican National Convention.  He later simultaneously held the offices of mayor of Spring Lake and NJ State Senator.  Brown was a leading businessman who owned OH Brown's Furniture Store, and served as president of the First National Bank of Spring Lake.

The building was designed by New York architect, Frank Eaton Newman and built by local contractor, Horace Moore.  The Tudor Revival structure houses the Spring Lake Library, a 350-seat theater, and meeting rooms.  Since 1978, the Spring Lake Theatre Company has called it their home.