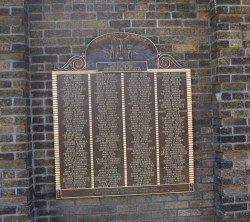 The Sayreville WWI Memorial contains a modern reproduction of the original bronze Honor Roll plaque, listing residents who served in the Great War.  The entire monument consists of two flanking square shafts of yellow-gray brick of uneven height with faux corner quoins ornamentation.  Originally crowned with corbeled brick battlements, this ornamentation has been replaced by concrete slab caps. The two shafts are joined together by a shorter brick wall which supports the bronze plaque containing the names of approximately the 350 local men who served.

The Honor Roll plaque, which is crowned by a semi-ovoid decorative panel containing the figure of Liberty striding forward atop a globe, flanked by a sailor to her left and a solder to her right.  This panel is flanked by scroll brackets.

The monument was designed by Monsignor William Gilfillan, of Our Lady of Victories Roman Catholic Church.  It was one of the first WWI monuments erected in the US.  Built by local men of local materials, the bricks were donated by the Sayre & Fisher Brick Company - the borough's major industry.