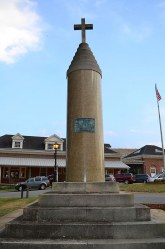 In 1910, Freemasons in the United States created the George Washington Masonic National Memorial Association (GWNMMA) to construct a memorial to George Washington somewhere in Alexandria, Virginia. A site atop Shooter's Hill was chosen, and ground for the massive memorial building and tower was broken at noon on June 5, 1922. Laying of the memorial's cornerstone occurred on November 1, 1923. By February 1924, the foundation was complete. To support the tower eight massive granite columns were placed on the floor of the first story. The floor of the second story was built atop them, and eight more massive granite columns placed above the first story columns. The roof of the second floor was supported by this second set of columns. The tower above rested on these second-floor columns. In December 1924, the installation of eight green marble columns (each weighing 11 to 18 tons) occurred on the first floor. Each column was 18 feet (5.5 m) high and 4.5 feet (1.4 m) in diameter, and arrived at Alexandria's Union Station by train from Redstone, New Hampshire. It was provided by the Maine & New Hampshire Granite Corp. One columnar section was damaged, and given to the Ladies Auxiliary of the Veterans of Foreign Wars (VFW). The VFW turned it into a memorial to American war dead, and erected it in front of Alexandria's Union Station in 1942.

Detecting your location...
No information to be displayed !
Edgar Bates