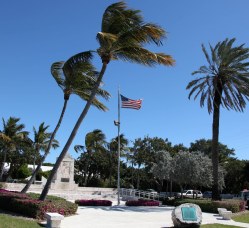 Also known as the 1935 Hurricane Monument this memorial was funded from numerous public and private contributions. It was designed by the Florida Division of the Federal Arts Project and constructed by the Works Progress Administration. It was dedicated on November 14, 1937. The ceremony included a military funeral with full honors. Four days after the 1935 Labor Day hurricane the Governor of Florida ordered all human remains to be immediately cremated where found. This resulted in 33 recorded sites on 3 of the keys which were later marked with stones. In the following 2 years as many as 50 skeletal remains were discovered throughout the region. These and ashes from all the cremation sites were collected and commingled in the memorial's crypt. Perhaps 300 people are buried here. 166 were veterans, mostly from WWI. They had been hired by the Veterans' Affairs Administration to work on the Overseas Highway. To date no markers have been placed for the veterans. No names appear anywhere on the memorial.

Detecting your location...
No information to be displayed !
Richard Bareford