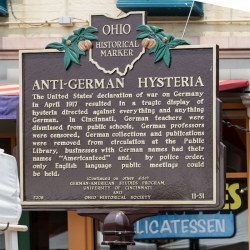 Erected in 2006 by the German-American Studies Program, University of Cincinnati, and the Ohio Historical Society, this marker reads:

The United States’ declaration of war on Germany in April 1917 resulted in a tragic display of hysteria directed against everything and anything German. In Cincinnati, German teachers were dismissed from public schools, German professors were censored, German collections and publications were removed from circulation at the Public Library, businesses with German names had their names “Americanized" and, by police order, only English language public meetings could be held.