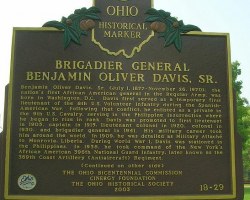 Benjamin Oliver Davis, Sr. (July 1, 1877 - November 26, 1970), the nation's first African American general in the Regular Army, was born in Washington, D.C. Davis first served as a temporary first lieutenant of the 8th U.S. Volunteer Infantry during the Spanish-American War. Following that conflict, he enlisted as a private in the 9th U.S. Cavalry, serving in the Philippine Insurrection where he began to rise in rank. Davis was promoted to first lieutenant in 1905, captain in 1915, lieutenant colonel in 1920, colonel in 1930, and brigadier general in 1941. His military career took him around the world. In 1909, he was detailed as Military Attache to Monrovia, Liberia. During World War I, Davis was stationed in the Philippines.