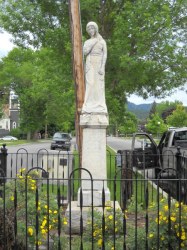 On May 30, 1922, the Austin Reedy Post 97 of the Montana American Legion dedicated a WWl Memorial Statue. It was in honor of the men who died during service in WWl. Austin Reedy was the first war casualty. Some of these men did not die in battle, but were members of the Armed Services at during WWl. All men were from what is now Lincoln County Montana. Libby is the County Seat. The Statue is on the corner of Mineral Ave. and Lincoln Blvd. Since it's dedication it has been a rallying point for parades, speeches and community events. All soldiers originally met at the monument on Decoration (Memorial ) Day and marched to the Cemetery for Remembrance Services.

Detecting your location...
No information to be displayed !
Jim Wardensky