"The Aviator" at Linsly School 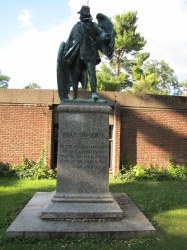 The Aviator is a monument that was commissioned by Sallie Maxwell Bennett, the mother of a young man killed during World War I on August 24th, 1918. Her son, Lt. Louis Bennett Jr., was serving in the Royal Air Force's 40th Squadron in France in the fall of 1918 when he was killed. Just before his death, he had destroyed three enemy planes and nine spy balloons from August 15th to August 24th. Before his decision to join a few hundred American pilots in England's Royal Air Force, Bennett was the captain of the West Virginia Flying Corp in Wheeling.

Detecting your location...
No information to be displayed !
Christopher Nay