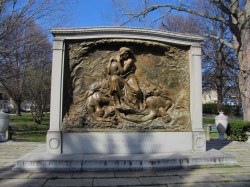 This monument was put forth by the State Legislature in 1919 as part of the plan for the Memorial Bridge connecting Kittery with Portsmouth, New Hampshire (dedicated in 1923). Governor Percival Baxter appointed a memorial commission in 1923. Russian Jewish sculptor, Bashka Paeff (raised in Boston), was awarded the commission to design the monument. The monument, featuring a woman holding a young child, was controversial at the time--considered too pacifist. Titled "The Sacrifices of War." The monument was dedicated on Armistice Day in 1924--the sculpture was dedicated on Memorial Day in 1926, and the Memorial was re-dedicated in 2000, when Angus King was Governor, after renovations had been made. The initial monument included a time capsule, replaced in 2000.

Detecting your location...
No information to be displayed !
WVWanderer1863