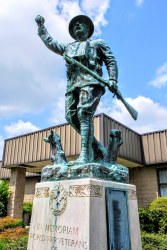 Bronze plaques on three sides of the memorial column are inscribed with the names of soldiers from this county that fought in WW1. Photos of these names are attached in the  photo gallery. Those that lost their lives are marked with stars next to their names.

Accompanying the memorial is an artillery piece.    It has been identified as a German 7.6 Minenwerfer (Trench Mortar) on a carriage probably made post war so it could be displayed as a memorial. In the trenches, it would usually be on a square brace pad. These types of mortars were not used after the war and so were scrapped or taken as a war trophy by the allies.