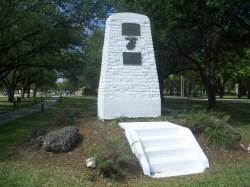 Marine Major General Roy Stanley Geiger (1885 - 1947) was a U.S. Marine Corps four-star general  who served in World War I and World War II.  During World War I, he served  in France with 5 Group, Royal Air Force, at Dunkirk. He commanded a squadron of the First Marine Aviation Force and was attached to the Day Wing, Northern Bombing Group. For distinguished service in leading bombing raids against the enemy, he was awarded the Navy Cross. In World War II, he became the first Marine Corps general to lead an army-sized force.  This memorial was restored and rededicated in 2015.

Detecting your location...
No information to be displayed !
Other
Bronze
Granite