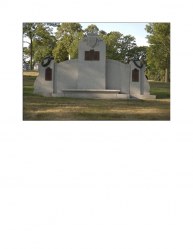 Manufactured of granite and bronze, this monument is com­posed of five sections which fit together, the nine fool tall center section being the tallest. On the ends are sculpted helmets, canteens, a gas mask, ammunition belts, a saddlebag and a bayonet. It also had medallions of the U.S., the Spanish-American War Veterans, and the Grand Army of the Republic. Atop the center section was a sculpted element, but it was stolen during the 1960s. The monument was dedicated on May 30, 1923, as a tribute to the Minnesota veterans of the Civil War, the Spanish-American War, and WWI.