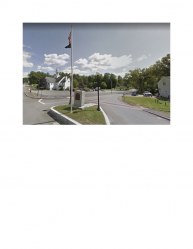 On a bronze plaque is a relief WWI scene depleting an allegor­ical female figure representing America or Columbia, standing in flowing robes. One hand holds a flagstaff bearing the American flag, and the other rests on a shield. Flanking her is a kneeling WWI in­fantryman and sailor. Above the three is an eagle.

Beneath is a roll of honor with a list of names of men who served during the Civil War, Spanish-American War, and WWI. The plaque is mounted on a rock-faced base comprised of an upright granite block atop a shorter, wider block. On the back is a bronze plaque honoring local citizens who died during WWII and the Korean and Vietnam Wars. The monument was produced by Liberty Bronze Works and was originally dedicated on Armistice Day, 1919.