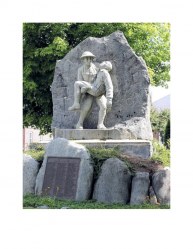 On a large boulder are carved two figures of WWI soldiers. A helmeted one with a pistol stands, holding a helmet-less wounded one in his arms. Virgo Brandt-Erichsen sculpted this in 1928-30, using local veterans L.t. Joseph D. Donahue and Sgt. David H. Harling for his models. It was dedicated on November 11, 1930.

Erichsen built the memorial out of a stone taken from Jaffrey. The massive 40 ton stone was moved to East Jaffrey over a six week period. Mr. Erichsen began construction of the memorial which took him almost two years.

The memorial plaque at the base lists the 104 Jaffrey men who served in the War. The dedication, on Armistice Day, was attended by hundreds from throughout New England. In 1949, Brandt-Erichsen created the Gold Star Mothers Memorial at the opposite end of the common which names the nine Jaffrey men who died during World War II. Also in the common - officially called Memorial Park - is the town Bandstand. This is the third one at this site. It had been removed some years ago but was returned and restored in 1986. It hosts summer concerts and other events during the year.