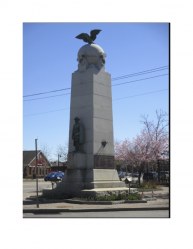 A base projecting from a large granite obelisk supports a bronze statue of Batavia resident Maj. Gen. Emory Upton dressed in a Civil War uniform. Atop the obelisk is a bronze eagle with outstretched wings, standing on a ball with four mooring rings. It was originally dedicated on August 6, 1919, to honor the soldiers, sailors, and marines from Genesee County. Later, dedications were added for the veter­ans of WWI, WWII, and the Korean and Vietnam Wars.