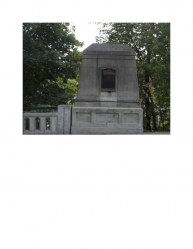 On the four bridge abutments are metal plaques honoring four branches of the military who participated in WWI. At the southeast are three infantrymen charging ahead, one down and one throwing a grenade. At the northwest, there are four biplanes amidst clouds. At the northeast are five artillery soldiers firing a cannon. At the southwest are two warships with smoke billowing from their stacks. These plaques were placed here in 1925 by the city as a tribute to Broome County citizens who served in WWI and in all other Amer­ican wars.