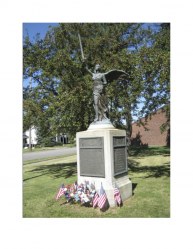 This is a six foot tall bronze statue of a winged female Victory, walking forward holding the remains of a sword. On a granite pede­stal are plaques depicting war scenes involving Infantry and Engi­neers. Air Force and Pilots, Artillery and Signal Corps, and Navy and Marines. It was dedicated on May 30, 1921, as a tribute to the citizens of Lorain who served in WWI. The rest of the sword and an olive branch which had been held by the figure were lost in a 1924 tornado. They were replaced in 1948 by August Nabakowski, and late in 1948 or early in 1949, they were stolen.