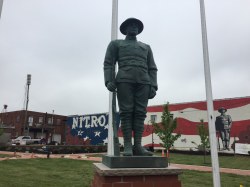 The city of Nitro was dedicated as a Living Memorial Park in 2017 as it was originally founded for ordinance production during the war. The name itself came from the explosives manufacturing that took place there. The town was established by the U.S. government to house gunpowder and explosives manufacturing.  The statue and memorial were created to honor Nitro’s yearlong centennial celebration and the names of approximately 300 Nitro World War I veterans are engraved at the park.

Detecting your location...
No information to be displayed !
TheWanderer63