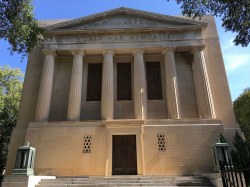 The World War Memorial Building, built in 1935 in Columbia, is significant as an excellent example of early twentieth-century Classical Revival architecture. The building also has the distinction of being designed by the prominent local architectural firm, Lafaye and Lafaye. This Classical Revival memorial was built to honor the men and women who served in World War I and still maintains the architectural integrity of its original construction. The memorial was first proposed by Governor Richard Manning and approved by the General Assembly in 1919. In that same year the Assembly appropriated $100,000 towards its construction, which was later withdrawn due to the Depression economy. From 1919 to 1935 the War Memorial Commission raised building funds primarily through private subscriptions. In 1934, the state received $33,200 in a grant from the Pubic Works Administration, and in 1935, construction began without the funds originally appropriated by the state. The Memorial Building portrays a sense of strength and fortitude with its solid limestone construction and massive temple form columned facade. The carved detail of medallions, laurel, and memorial inscriptions remain in complete integrity. Listed in the National Register May 26, 1995From its construction until 1960 the building was the home of the South Carolina Department of Archives and History. Then it was used by the University by the Department of International studies. From 1972-2002 the building became the home of the South Carolina Confederate Relic Room and Museum. It is now used by University Publications.Above the front door it is inscribed:Dedicated To The Men And Women OfSouth Carolina Who Offered TheirLives In the Winning Of The War

Detecting your location...
No information to be displayed !
TheWanderer63