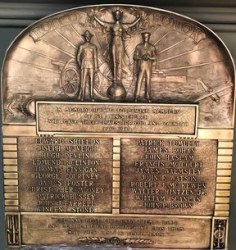 This bronze tablet honors the 21 fallen parishioners of St. John’s Cathedral (RC) that made the supreme sacrifice during the great war. The plaque was commissioned by the parents and parishioners of St. John’s under the direction of Rev. Dean McNulty in 1919. The members of the parish held a solemn high military mass on Thanksgiving. “At the conclusion of the mass, the roll call of the twenty-one dead was held, and each of the girls answered a name as a candle on the altar was extinguished and the bell in the tower was tolled” (The Morning Call, Nov. 28, 1919). The plaque was then unveiled and blessed by Rev. Dean McNulty.

The plaque was taken down in the 1980s when the Cathedral was renovated. It was missing for over 30 years and just this summer, was relocated. There will be a memorial mass and plaque rededication ceremony on Nov.11, 2018 at 11:30 am for the 100th Anniversary of the Armistice at the church.

The plaque reads as follows:
Roll of Honor
In memory of the following members of St. John’s Church who gave their lives for God and country.
1917-1919

“Eternal rest give unto them, O Lord!
And let perpetual light shine upon them.
May they rest in peace. Amen.”

The first photo is of Bridget Shields Healey whose brother, Edward J. Shields, perished in the great war and is one of the twenty-one men listed on the plaque. The second photo is of the plaque today.

Detecting your location...
No information to be displayed !
Mary Feenan