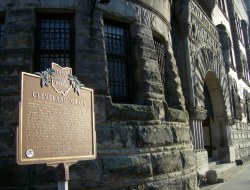 The Cleveland Grays were organized by statute in 1837 as an independent volunteer militia company. The Grays were the first company to leave Cleveland for service during the Civil War. In April 1861, they were designated Company E, 1st Ohio Volunteer Infantry (OVI). They saw action at Vienna Station and First Manassas and also served in the 84th OVI and were on duty with the 150th OVI at Fort Stephens when Confederate General Jubal Early attacked Washington in the summer of 1864. During the Spanish-American War the Grays volunteered for service and were admitted to the National Guard as the 1st Battalion of Engineers, 10th OVI. In 1916, they joined General John J. Pershing's Punitive Expedition against Mexico. After service on the Mexican border, the Grays became part of the 1st Battalion, 148th Infantry Regiment, 37th "Buckeye" Division. Assigned to the Western Front, the Grays would see action in the Meuse-Argonne Offensive of 1918. World War I was the last active service of the company. During subsequent conflicts from World War II through the Persian Gulf War, individual members have served in the armed forces. In 1893, the Grays constructed an armory at 1234 Bolivar Road in Cleveland. The armory became a center not only for the organization's military activities, but also for many of the city's social and cultural activities. The first concert of the Cleveland Orchestra, Cleveland's first automobile show, and performances by the Metropolitan Opera and John Philip Sousa and his band were held at Grays Armory. Still in existence as an historic and ceremonial organization, the mission of the Grays is to interpret the military heritage of Greater Cleveland and to preserve Grays Armory.